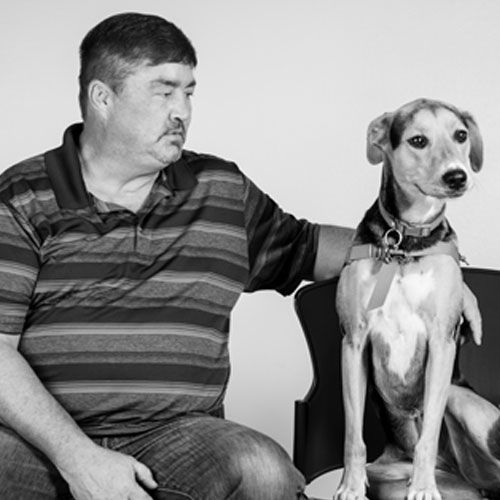 My wife and I were first introduced to Bailey on Oct 26th of last year, when Leslie called to tell me she thought she found the perfect dog for me. I took Bailey home on Oct 27th and from that day forward, Bailey and I have been inseparable.

On Bailey’s very first night at her new home, or as my daughter Ashley calls it “HER FOREVER HOME”, I was suddenly awakened from one of my reoccurring nightmares, with Bailey laying on top of me, nudging me with her nose to wake me up.  That is when I knew we were going to be a great team.

At the very beginning of our training, Bailey and I were first paired up with another veteran and his dog who were also new to SBF, Louis and Stella. Since then, Louis and I have formed a lasting friendship. Which would have never been possible if not for SBF.

We were later informed that Stella and Bailey were actually rescued and housed together in the Green Valley Animal League, before Leslie found them and brought them to SBF. So obviously, they were extremely excited when they were together for training. Louis and I often meet up outside of training, so Stella and Bailey can run and play, which gives Louis and myself a chance to talk.

Bailey has proved herself to be a very loving, intelligent,  and quick learner. She instantly became part of our family. She is very protective of my daughter, so much so that if she catches anyone rough housing with her, Bailey runs to her aid.

My son Shawn is her play toy. Whenever he is outside, Bailey gets overly excited. They take off running, jumping, and play catch together until both are exhausted, and just the sound of my wife’s voice triggers an immediate tail wagging response.

Bailey has filled a void in my heart caused by the death of Ginger, our Rhodesian Ridgeback that was with us for 16 years.

She has already helped me tremendously, not only with all the tasks she does for me, like bringing me my shoes every morning, but with her loyalty to me. She is always by my side, she is always watching me. She knows that I will protect her like she protects me. I have less anxiety about going out into public now, because I know she is with me.

SBF made that possible, and for that I am forever grateful. With Allison’s, Leslie’s, and Jim’s unwavering support and patience, they have made it possible for Bailey and me to be here today.

In closing, I want to thank the entire SBF staff, for not only bringing Bailey into my life, but also for the amazing service and opportunity they provide to my fellow veteran’s.