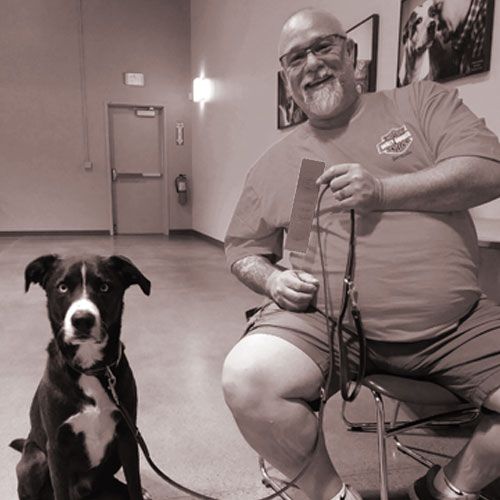 Beau hadn't had Jethro even a month when something remarkable happened. Beau was answering calls from his home office, and took a call from an angry individual. As Beau tried to calm the caller, he himself was becoming more upset. That's when a napping Jethro suddenly woke, stood up from his place beside the desk, and rested his head in Beau's lap. And then he stared at Beau. This isn't the kind of dog you can ignore when his piercing blue gaze falls on you. As Jethro leaned into Beau, and Beau pet his new service dog in training, he felt himself grow calmer. This isn't something Jethro was trained to do, it's just the kind of dog he is. Of course, there were things Jethro had to learn about being a service dog, and Beau helped him through all of that. To get through this program, Beau has pushed the limits of who he thought he was. Because of Jethro, he has become more patient, and calmer. Dogs have a way of humbling us like that. Beau and Jethro grew together into the team you see on stage today, and neither of them could have done it without the other.