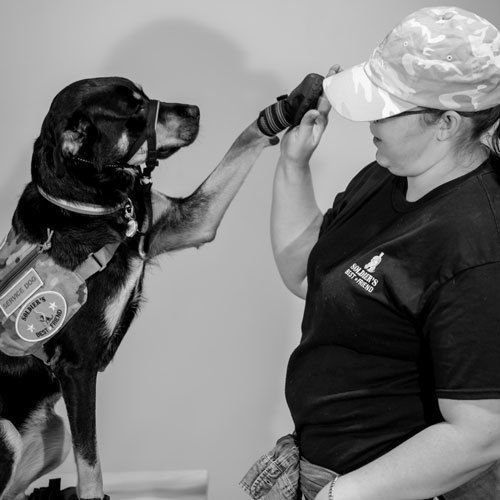 When I started the program, I knew that having a service dog would help me. However, I had no idea that it would change my life as much as it already has. For years I have been suffering from several issues including PTSD, and physical limitations. Athena has been amazing! She is already helping me out so much more than I thought she would. Although this pandemic has made all my issues worse, she has improved my life. I can proudly say that Athena has eased many of my problems and pains. She picked up all her training very quickly. It was fun to learn how she reacts to things, and what she is capable of. I would not have been able to make it through without Ashley and Allison. Ashley would go out of her way to help when I became frustrated and was very encouraging and supportive.

I found Athena online late one night. She was in a horrible situation. Someone was using her as a bait dog. I was told that I needed to pick her up ASAP. She was terrified, shaking, and had no idea what to think of me. For the first whole month my goal was for her to get comfortable, and potty trained. I was originally just planning on saving her and find her a loving home. She very quickly found her place in our hearts and in our home, and I would not change it for the world. I had no idea that she would change my life forever!