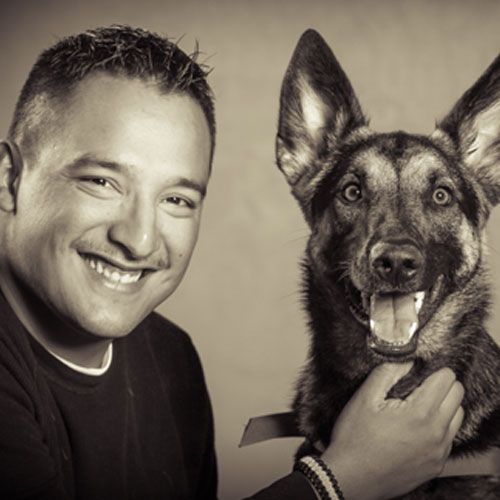 I want to thank Soldier's Best Friend for helping with the training of Cadence because when we started Cadence was a puppy with a puppy mind and after the training, I noticed a big change and she has synced herself with my moods and helped on so many situations where I would have given up.  She is now a great assistance to myself being somewhat normal.  Thank you so much John Burnham, Trainers Carly, Jo and Shawna, and staff.

Hi, my name is Albert. I was blessed with a best friend who we both realized we needed each other. I needed help with my PTSD and when she was a baby she had parvo and intestinal parasites to the point she was only going to survive a night. I gave her half of my heart and she did to me. Months down the road I took her back to the vet that was saying she was going to pass away and every one there was surprised she was alive. That night when I took her home I felt like my fighting spirit grabbed hers and latched on and helped her fight the unbeatable odds that she was dealt. She was my best friend for five years until she went to the rainbow bridge on August 26th 2016 and that is also my birthday. I gave her to a friend so she would have more room to run around because we ended up in a hotel for a month because our house was not built. She was very happy when she lived in New Mexico, it was the best in her life, she would chase squirrels and a couple wildlife and play in the river and every picture she was happy with. I was glad that I gave her a good place to enjoy. She gave me so much and helped me see that I was better and I could be out in public. I could not be here if it wasn't for her. I do not know where I would be without her. She was the youngest to join SBF at 10 months and she did well. She had some separation anxiety but we worked on it a lot. She was really smart and had the most carefree energy when it was the two of us and she was a lap dog and she loved cuddling with me. It was hard to sleep without the first few weeks she left me. She is so loved that I made a customized urn for her. She is always by my front door where she always liked being. She was truly a soldier's best friend to me.